KEEN has made the commitment of €50,000 in cash and products to support Ukrainian refugees at the Poland, Slovakia and Hungary borders.

Cash donations will be driven through the Red Cross and Global Giving to provide immediate support to local organisations. In addition, KEEN has teamed up with local distributors in Poland and Czech Republic, MM Sport and Outdoor Concept, to support Ukrainian refugees at the Polish, Slovakian and Hungarian borders, with footwear and other essentials.

More than half a million people have fled Ukraine since Russia began its invasion last week, the head of the UN’s refugee agency (UNHCR) said on Monday. The refugees are predominantly women, children and the elderly. Some walked many miles through the night while others fled by train, car or bus, forming lines kilometres long at border crossings with neighbouring countries: Poland, Moldova, Hungary, Romania and Slovakia. The numbers, and the ensuing need, are expected to increase.

Working alongside the European Outdoor Group (EOG), KEEN is asking other outdoor companies to act by doing what they can to support those affected by this conflict.  Support can include cash as well as essential items like clothing, food, personal hygiene products and bedding to distribute to refugees displaced by the fighting in Ukraine.  KEEN fans can also make donations directly to Global Giving. 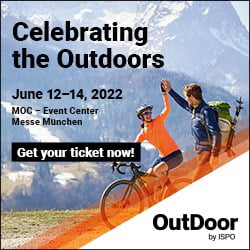 After four amazing seasons, the Golden Trail World Series returns in 2022 with new ambitions. They include supporting athletes in their quest to become professionals and above all making trail running a must-see, televisual event.

Trail running has experienced a spectacular rise in popularity over the last fifteen years. So spectacular that the sport has witnessed the development of many private circuits across the world. Between the short and the ultra distances, the national and the private circuits, it was tricky to know what was what for a while. "Nobody understood who was doing what exactly, and more importantly, the athletes' level of performance became diluted across all the different circuits, which prevented those at the top from competing against each other" explains Grégory Vollet. And it was precisely to offset this problem that he came up with the idea of launching the Golden Trail World #goldentrailworldseries #outdoors #trailrunning ...

A packable down jacket is one of the most practical items for any cold weather travel.

Kathmandu is well known for making durable outdoor gear and this premium down filled jacket is no exception.

This jacket is a top pick because of how versatile it is - it features a 100 per cent Ripstop Polyester outer, ethically-sourced 600 fill power duck down, while the DWR-finished shell wicks water off so you can wear it in light rain or snow, without having to worry about it getting soggy. All the while being light as a feather (pun intended!)

Don’t be fooled by its ultra-light design though, this jacket will certainly keep you warm. When it comes to down material, it also has a more durable design and it holds up better than most in light amounts of precipitation. Of course, for seriously colder temps or high altitudes, you should look for something warmer. But for most backpacking environments, this has got you covered.

The #Vibram No Show Toe Socks (2Pack) Coolmax blend toe socks are a stretch fit designed to fit like a glove for your feet. This fit will add approximately 1mm to your feet dimensions which rarely affects the size of shoe you choose. They can also be worn with a conventional trainer. Their benefits along with the obvious need for the toe socks for Vibram Fivefingers shoes are that they wick moisture more effectively from between the toes. This is great for general foot health and has also been known to help clear up or prevent athletes’ foot and also for anti-blistering between the toes.

This year's event welcomed over 2,000 athletes, including elite and amateur triathletes and more than 50 professionals from the United States, the United Kingdom, Asia, and South America, who battled it out across the finish line.

"Athletes from around the world took to the streets of Los Angeles to compete in the triathlon, bike tour, or 5k," said Ibi Montesino, senior vice president, and managing director for Herbalife Nutrition North America Region. "Thousands of spectators on the sidelines cheered the athletes on, and we thank them, our partners and sponsors for making this a successful event."

The results of the top three podium spots in the elite men's and women's International Distance category are as follows:

British outdoor brand #Rab (owned by Equip Outdoor Technologies Ltd.) has announced their entry into the off-road bike market in SS23. At their recent International Sales Meeting, Rab successfully introduced their first ever #Cinder off-road bike collection to their sales teams. Cinder is the result of a long and intense R&D process. It builds on more than 40 years of expertise crafting clothing and equipment to protect against the most adverse weather conditions, providing performance and comfort for all mountain pursuits.The new Cinder collection includes 31 styles for men and women. From the gravel track to the woodland trail, to the hike-a-bike mountain epic, Cinder is designed to give riders freedom and confidence to take on whatever is in their path.

The Professional Triathletes Organisation (PTO) today announced the final athlete line-up and broadcast presentation team for the inaugural #PTO Pro Am, to be held this Sunday 15 May at the Herbalife24 #Triathlon Los Angeles and streamed live for free around the world.

The event will see six of the world’s top professional athletes race an Olympic-distance course alongside Challenged Athletes Foundation (CAF) athletes and special guests including former UFC star Paul Felder and Olympic silver medallist Heather Fell. CAF athletes will kick-start the day with a 1500m swim in the beautiful pearlescent sea off Venice Beach. Once out of the water, they’ll tag in a highly-ranked PTO professional who’ll rip up the road over a 40km bike course finishing in downtown LA between the Crypto.com Arena and Microsoft Square, outside the Herbalife Nutrition HQ. From here, another CAF superstar, or one of our special guests, will complete a 10km run to close out this first-ever PTO #losangeles ...

The platform is aimed at supporting employees who might be struggling with personal mental health issues. Having been in the mountain sports industry for almost 90 years, Ellis Brigham felt it was the right time to support those who maybe feel they have their own personal mountains to climb.

Rob Brigham, Managing Director, said: “We all experience those off days, low morale, anxiety or feelings of worry, being overwhelmed or stressed. It can be hard to share or talk about these feelings for fear of being judged, which is why #Togetherall is a completely anonymous platform.”

It is estimated that one in four people suffer mental health problems, made worse by the recent COVID pandemic and current world issues. Ellis Brigham hope Togetherall will provide the #ellisbrigham #mentalhealthawarenessweek #staffwellbeingplatform ...

Tomorrow, Friday 13th could be lucky for some! The final day to enter your product in the UK Outdoor Industry Awards 2022.

All the entries will be displayed at the Outdoor Trade Show (OTS) which takes place from June 7-9 at the Exhibition Centre Liverpool and you don't need to be an exhibitor or OIA member to enter although there is a discount for those who are.At the show, a judging panel, will vote for the three finalists in each category. The finalists will be announced at the OTS Social on the June 8, 2022, you can find out more and buy your tickets here. After the show, the online public voting will commence to choose the winners in each category and the overall Product of the Year. As in previous years, we will work in conjunction with a variety of partners who will reach a wide variety of consumers in the outdoor spectrum to ensure a cross section of the #outdoors and will comprise a database of around 1 million opted-in consumers. #oiaawards #outdoortradeshow ...

Gary Robbins, globally recognised endurance athlete from Chilliwack, BC, will join an all-star line-up at the inaugural Run Show Chicago, set to take place on June 4-5 at the DES Convention Center. Robbins will join Olympic athlete, Carl Lewis, ultramarathoner Dean Karnazes, Mirna Valerio aka The Mirnavator and professional ultra-mountain runner Sally McRae as they take to the stage to inspire and motivate the running community.

Robbins has spent over 15 years trail running competitively, racking up incredible feats of endurance with multiple FKTs and shot to notoriety after the release of the iconic ‘Where dreams go to die’ YouTube documentary, sharing his journey to complete the infamous Barkley Marathons in Frozen Head State Park. Gary has tackled the gruelling and now world-renowned race on three occasions, narrowly missing out on the 60-hour race cut off by mere seconds in 2017.

The 100 per cent made-in-America technical outdoor brand, is proud to introduce new, lightweight Insect Shield shirts and pants that deliver unprecedented comfort and protection in the most innovative garments ever designed for outdoor enthusiasts.

“We have added value to the innovative brand #Forloh for a number of years and we are looking forward to share paths for many years to come. The warm weather apparel of Forloh integrates Polygiene’s combination technologies, #Polygiene BioStatic and Polygiene OdorCrunch which give full coverage odour control - something that is crucial in hunting,” said Ulrika Björk, CEO Polygiene.